NBN Co will end its 40 percent bandwidth bonus at the end of November, saying peak data demand has returned to “normal forecast levels of growth”.

The company will provide a final cushion to retail service providers as they begin to levy connectivity virtual circuit ‘overage’ charges once more in the form of a “transition credit” for December and January.

Beyond that, it intends to bring forward some planned increases in the amount of bandwidth that comes bundled with 50Mbps services and above from May to February 2021.

It will also pay incentives that encourage retail service providers (RSPs) to push more users onto higher-end plans, logic it first employed last year when it suggested that having many high-speed users would be a net benefit for RSPs, since those plans came with more bandwidth.

Due to the way the NBN works, that bandwidth is pooled nationally and can be allocated by RSPs across the 121 points of interconnect according to demand for internet services.

However, the idea that having more high-speed users eases congestion and CVC overage charges is untested, at best.

RSPs that offer NBN Co’s up to gigabit service already quote evening peak speeds conservatively between 215Mbps and 250Mbps, likely due to the cost overhead involved in guaranteeing a much higher peak speed. Aussie Broadband (and others) have warned previously that these services come with about half the included bandwidth that they actually need.

The fact that NBN Co is persisting with extra bandwidth charges even as industry pressure ramps up for the charges to be dumped altogether is unlikely to be well-received by the industry.

But, according to NBN Co, traffic demand has dropped off, to the point where it is back in line with projected traffic growth for the end of 2020 – numbers which were prepared before the pandemic.

“NBN Co’s tapering of Covid-19 CVC credit offer to internet retailers recognises that peak data demand is returning to normal forecast levels of growth,” the company said in a statement.

It is understood that NBN Co’s year-on-year growth forecasts are for about 25 percent extra bandwidth to be required.

Current demand is understood to be within low single digits of that forecast, and that would likely drop if Victoria’s lockdown restrictions were eased.

However, this still assumes NBN Co’s bandwidth growth forecasts – and the extra costs involved in servicing them – were feasible to begin with, and do not exert undue pressure on RSPs to constrain internet services or raise prices.

The return to CVC charging

When the 40 percent bonus bandwidth offer expires at the end of November, “eligible” RSPs may be able to access “some additional CVC capacity at no extra cost” as a transitional arrangement.

“NBN Co is planning to offer a transition credit to eligible internet retailers for two months,” it said.

“This will be applicable to fixed line, fixed wireless and Sky Muster satellite services.”

The focus on ‘fast’

Under Focus on Fast, NBN Co hopes to now move many of these users up to at least 100Mbps plans, which it says that 72 percent of its fixed line network can support.

Focus on Fast brings with it two potential impacts that could ease some pressure on CVC overage charges.

First, NBN Co said it is “working to bring forward the release of additional CVC data inclusions” on its 100Mbps and above bundle discounts “so they are available from December 1 2020 for those retailers who enter into the fourth version of NBN Co’s wholesale broadband agreement (WBA4).”

That amounts to an extra 500Kbps of CVC per service that would otherwise have come into effect in May 2021.

Focus on Fast also comes with “wholesale pricing rebates” from February 1 next year, “which will be applicable for up to six months.”

“The rebates are being planned to effectively offer additional discounts to internet retailers for upgrades to the 50 Mbps speed tier and certain key bundle discounts,” NBN Co said, namely 100Mbps and above.

In practical terms, that means that RSPs will pay a wholesale charge of $56 a month for six months for any customer that moves up to a 100Mbps or above service. 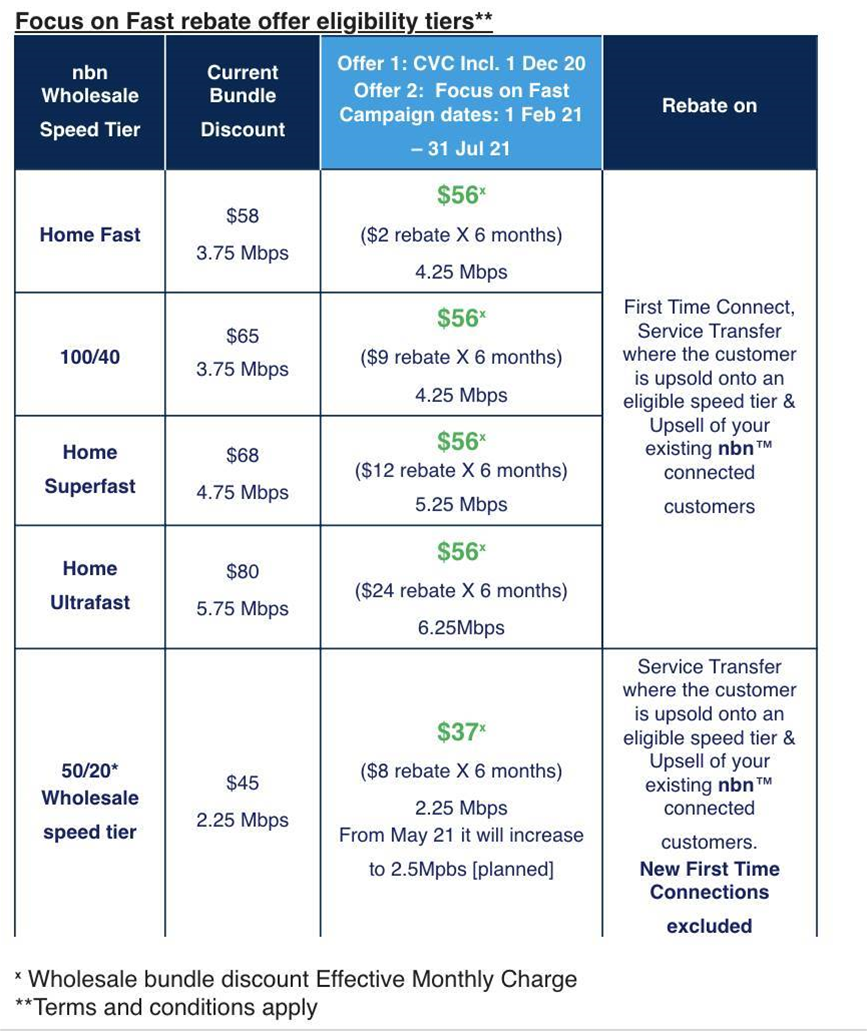 In other words, RSPs could technically be in-market with some fairly aggressively-priced upgrade offers in the first half of 2021, albeit the discounts are short-term and customers will ultimately need to pay more if they like the experience.

That’s unclear, particularly if the user profile on points of interconnect is substantially altered in favour of higher numbers of users of high-speed services with potentially much larger bandwidth needs to fulfil.

For its part, NBN Co continues to argue that the bandwidth inclusions that come bundled with its biggest plans contain enough headroom to produce a net benefit to an RSP that signs up many of these users – despite RSP claims to the contrary.

“Higher speed bundle discounts come with more CVC inclusions, which helps deliver improved performance for those customers while also adding to the pool of included CVC capacity that is available for retailers to utilise across their entire customer base,” NBN Co chief customer officer Brad Whitcomb said in a statement.

Whitcomb said that NBN Co had provided “an important shock absorber to the industry” in the form of its CVC bonus for nine months, but could no longer justify it.

In any event, he said the nine months had “given internet retailers time to adjust to growth in data demand” – and presumably put financial provisions in place to cover hundreds of thousands to millions of dollars they will start to pay in overage charges once more.

“To provide the industry with greater cost certainty over the critical summer holiday period, and to assist the transition to our new CVC inclusions and wholesale pricing rebates, we will continue to provide eligible retailers with some continued CVC financial support through December and January,” Whitcomb added.

Still, some details of the resurrection of bandwidth charges and the transitional arrangements are yet to be fully worked through.

“Detailed terms and conditions on this campaign, together with the incentives outlined above, are being worked through by NBN Co and will be made available to the industry soon,” the company said.

“Some information may also be subject to change.”

The timing of NBN Co’s announcement comes on the eve of company executives appearing before a Senate Estimates committee for questioning.

Wednesday provided some early flavour on the types of questions NBN Co might face, as Labor pressed Department of Communications officials on the increase in the cost of the NBN project to $57 billion, following upgrades announced in the latest corporate plan.

Government attempts to influence the direction of several long-running examinations of NBN Co’s price and non-price terms by the Australian Competition and Consumer Commission (ACCC) is also likely to be a hot topic.

In that context, the ‘Focus on Fast’ campaign may offer executives some talking points on demand for higher-speed services in the wake of Covid, while ongoing work on WBA4 may also provide positives, given terms contained in the prior version – WBA3 – led to many of the ACCC inquiries that have already extracted key concessions and continue to pose a threat to NBN Co’s economics.